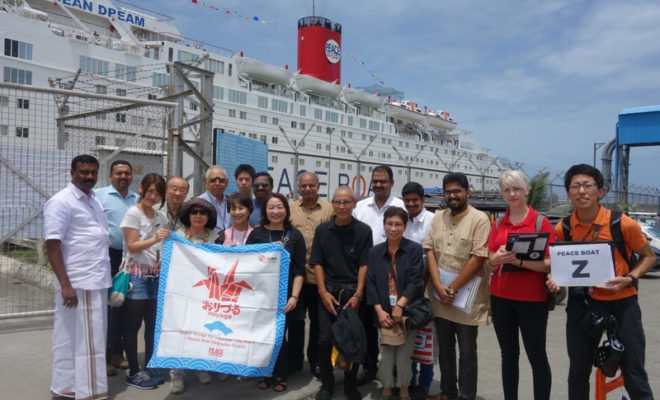 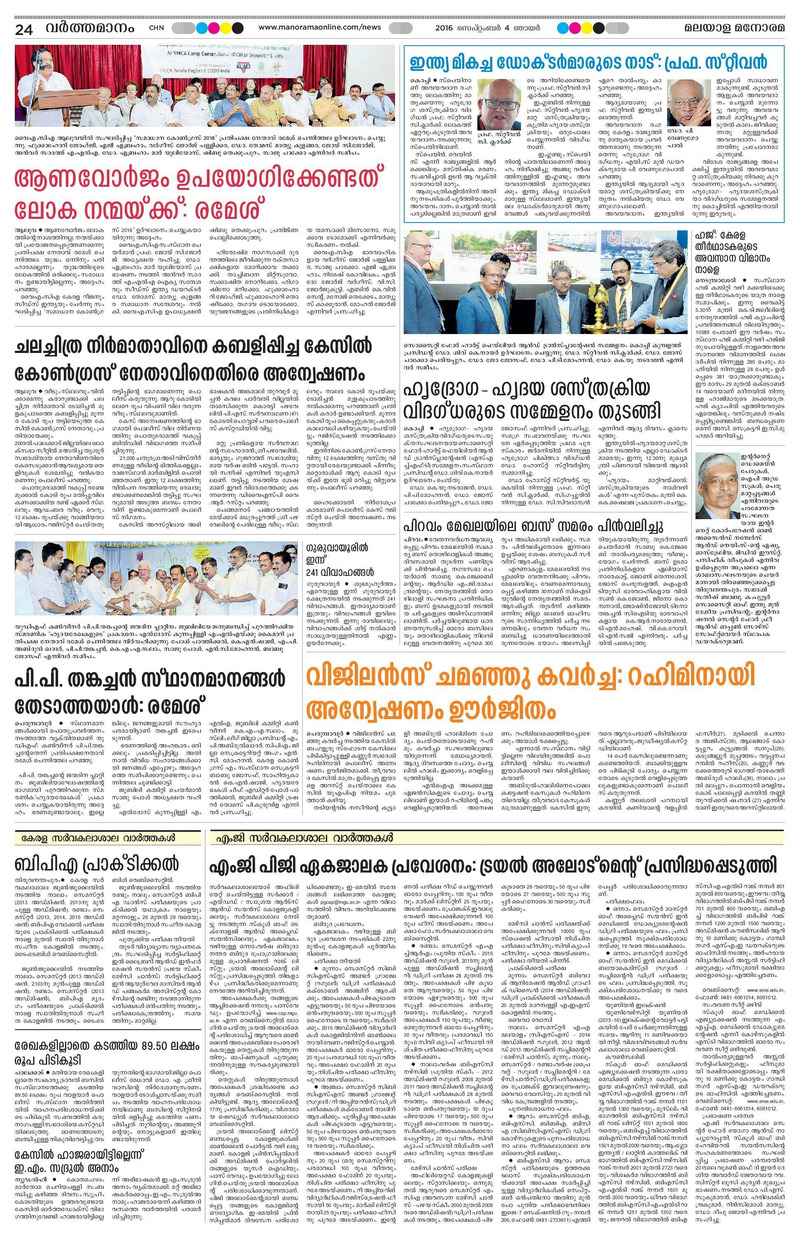 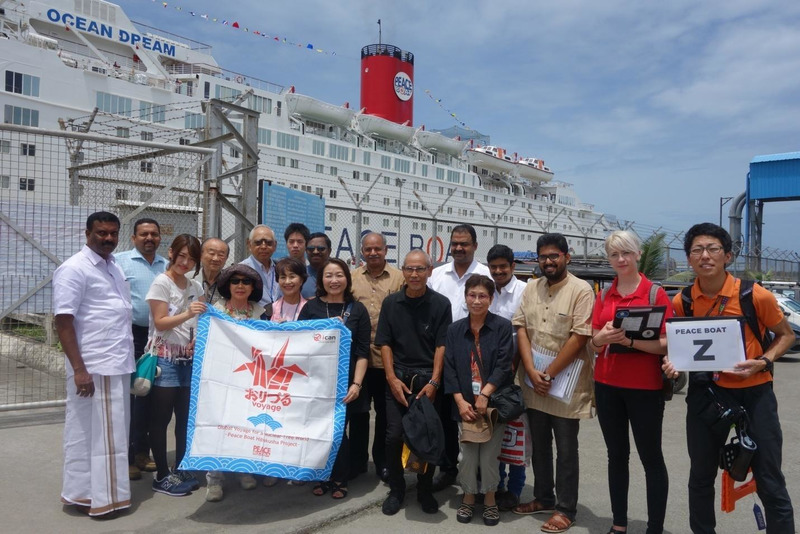 The survivors of the nuclear bombings of Hiroshima and Nagasaki who are participating in the Ninth Global Voyage for a Nuclear Free World: Hibakusha Project was accorded a grand reception at Cochin Port on September 3, 2016. The reception was jointly organized by SEEDS India and YMCA Kerala Region in close association with Mayors for Peace 2020 Vision Campaign. Mr. Fukahori Johji, Ms. Fukahori Toshiko, Mr. Moikawa Takaki, Ms. Tagawa Toyoko and Ms. Sakashita Noiko were the participating Hibakusha. Ms. Higashino Mariko and Mr. Tachibana Mitsuo were the 2nd generation Hibakusha/Legacy Messengers. Ms. Yamazaki Misono and Mr. Samukawa Tomoki were the Youth participants. They were accompanied by Mr. Sakuma Takashi and Ms. Tanya of Peace Boat.

The Hibakusha Team was accorded a warm reception at Cochin Port on September 3 at 11:15am. Officials of YMCA and SEEDS-India, Mayors for Peace 2020 Vision were presented one hour before the Port to welcome the Team. Due to a nation-wide strike on September 2 customs clearance procedures were late to start on September 3, hence happened a slight delay in commencing the programs of the day. Each member of the Team was received with a bouquet in front of the Peace Boat. By 11:30 the Hibakusha (Hiroshima-Nagasaki A-Bomb Survivors) Team along with the organizing team departed to YMCA Head Quarters at Aluva for Peace Congress 2016. The way to Aluva presented them with gorgeous scenery like backwaters, Chinese fishing net, enchanting Local life and small country boats. 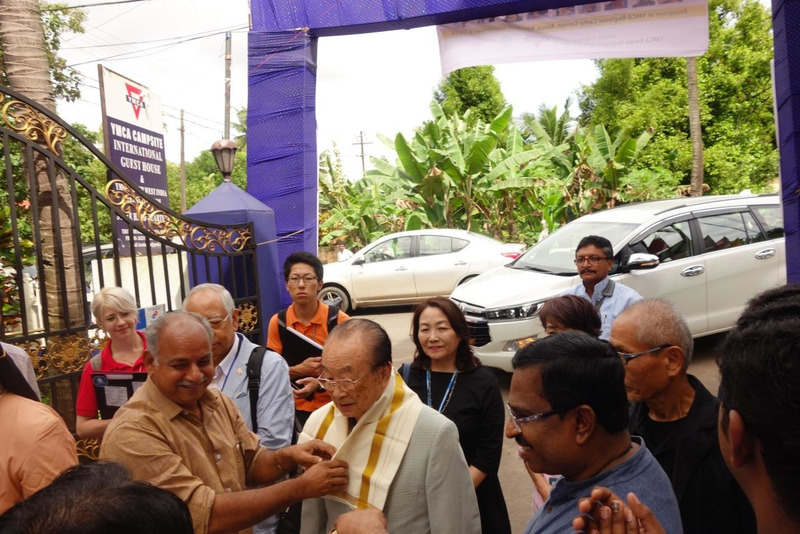 Hibakusha Mr. Fukahori Johji is being draped with Ponnada, a customary shawl at YMCA Aluva, Kochi.

After the reception the Hibakusha Team offered floral tribute at the Peace Pole which was installed at YMCA Head Quarters Aluva 2015 by the then visited Hibakusha Team. The message ‘May Peace Prevail on Earth’ has been engraved on the pole in 4 languages. The Hibakusha team and organizing team prayed together for world peace and harmony. 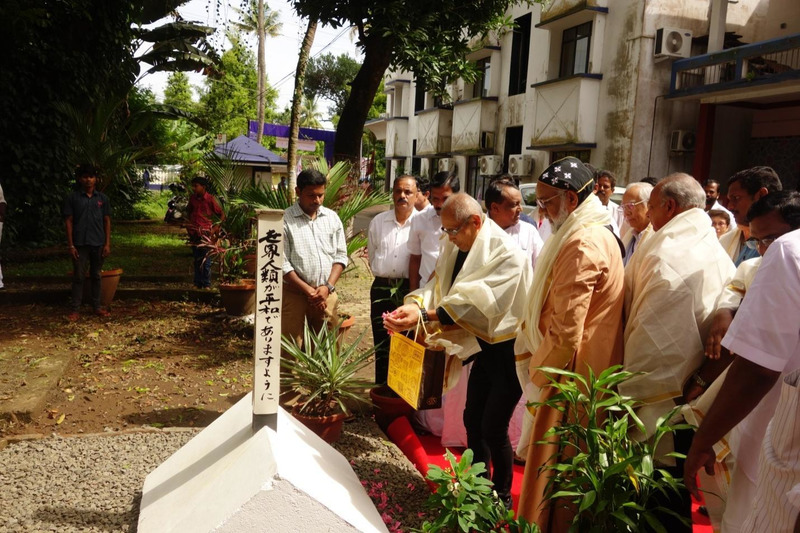 SEEDS India and YMCA Kerala region jointly organized Peace Congress 2016, a platform to bring together civil society organizations comprising selected educational institutions and NGOs along with Hibakusha team to exchange their thoughts on the possibilities of abolishing nuclear weapons and wise use of nuclear energy. It was indeed a vibrant platform graced by various renowned social, religious and political activists in Kerala, India. Mr. Ramesh Chennithala, the Opposition Leader of Kerala Legislative Assembly inaugurated the Congress. “We have a thought that the Nuclear power must use for the benefit of humanity not for its destruction but now many nuclear power related issues warning us about that the Nuclear Power is harmful for humanity even it is for Peaceful purposes” told Mr. Chennithala in his inaugural address. “War is not the solution and the world has never seen peace gained through war”, he added. 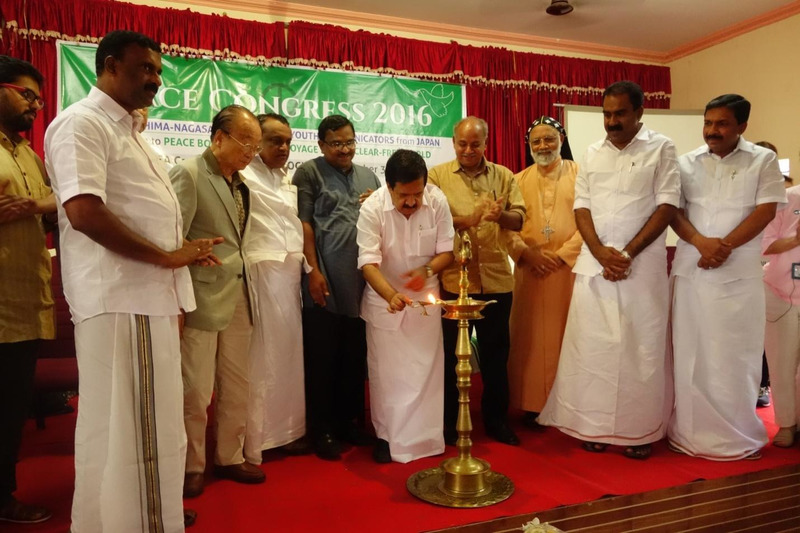 Prof. Joy C. George, Chairman of Kerala YMCA presided over the meeting. Dr. Abraham Mar Julios Metropolitan delivered a message highlighting the need of sowing the seed of peace and nurturing it. The Bishop addressed the duty of religions and different traditions of the world to unite for peace and stand for a world without nuclear arsenals. 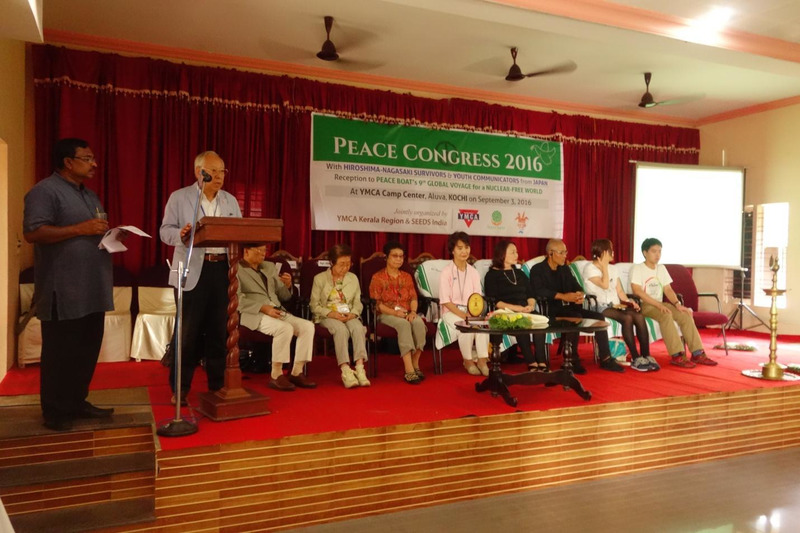 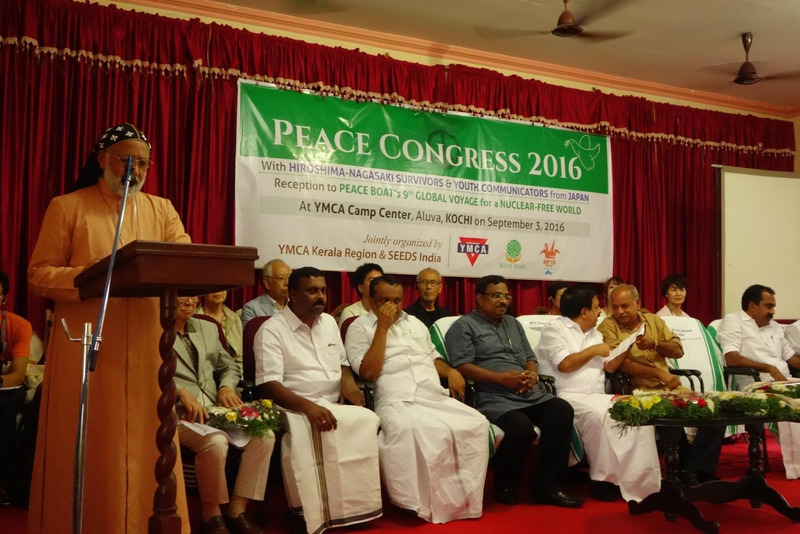 Dr. Thomas Mathew, 2020 Vision Campaigner of Mayors for Peace delivered the peace message. He spoke about the aftermath of Hiroshima-Nagasaki A-bomb tragedy. He also explained the vision of Peace Boat and Hibakusha Project. He also told that this year marks SEEDS-India’s 26th anniversary of Hibakusha Peace project started in 1990 August 5 at the campus of Missionaries of Charity, instituted by newly canonized St. Teresa of Calcutta. 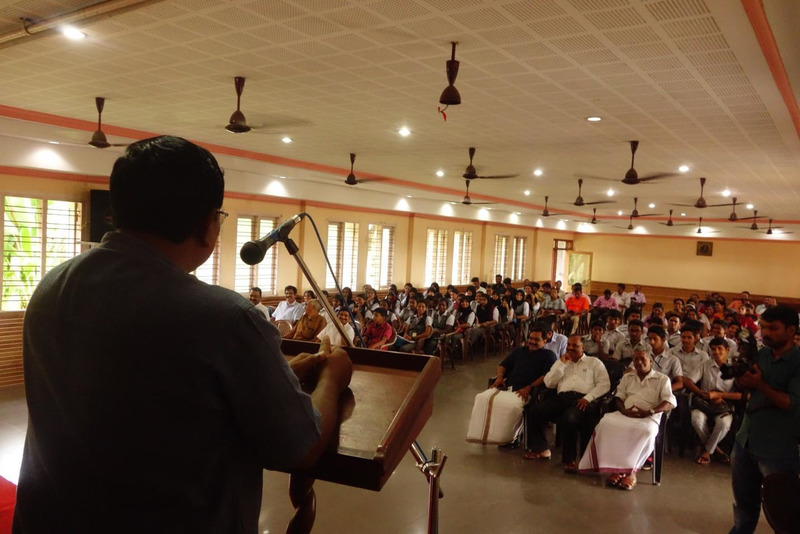 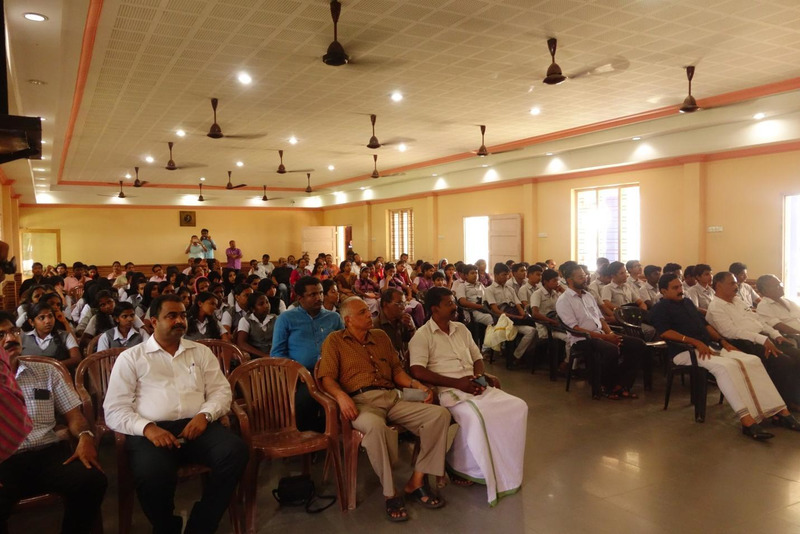 A view of thickly packed auditorium

The proud moment was cherished by the Hibakusha Team along with the representatives of various civil society organizations and educational institutions who have joined testimony exchange event.

Mr. Morikawa Takaaki shared his testimony and explained the terrible faces of Hiroshima-Nagasaki disaster. He also shared about how his family suffered due to disaster and the scary feeling of transferred A-Bomb diseases to the next generation. A hundred and fifty strong audiences, especially from selected college and schools were informed about the menace of Hiroshima-Nagasaki A-Bombing and the future threat of the nuclear war against the humanity. The organizers both SEEDS India and YMCA honored Hibaksuhas by presenting them with custom made mementos. Hibaksuha team distributed Paper Cranes packet and books on Hiroshima-Nagasaki to the members of civil society organizations.

Students from selected colleges dialogued with Hibakushas. Some thoughtful and important questions were asked and Mr. Takaaki answered one by one. The Question-Answers and suggestion were mainly related with the eradication of nuclear weapons, chemical weapons, alternative energy, Fukishima Daichi Nuclear Power Station Disaster, the positives and negatives of nuclear power and how young people can join more actively with the process of world peace. Hibakushas along with Dr. Thomas Mathew, 2020 Vision Campaigner responded to the sharing.

Mr. Shibu Thekkumpuram, Regional Vice Chairman of YMCA led a peace pledge affirming the duty to work for world peace through different actions including A-Bomb exhibitions, Peace Signature collections, observing Hiroshima and Nagasaki Days etc. All the participants recited it. Mr. Manoj Thekkedath, Administrator, YMCA and Mr. Abin K. Vincent, Coordinator of Mayors for Peace Vision 2020 thanked the Hibaksuha Team and participants for making the Congress a meaningful one. The program was over by 5:45pm. By 6:00pm the Peace Boat Hibaksuha team left YMCA Campus for port and the team reached onboard by 7:30pm.

All major Kerala News Media and TV channels covered the program with much importance.

We believe that Peace Boat’s 92nd Global Voyage and its 9th Hibakusha project, with aims to preserve and pass on the memories and testimonies from Hiroshima and Nagasaki nuclear attacks and to call for a nuclear free world will bear fruits in the coming days.